UNICEF sponsored an event on October 11th and I am happy to be able to share with you.  Livestream   After the opening addresses by Mr Anthony Lake, Executive Director of UNICEF and Dr Babatunde Osotimehin, Executive Director and Under Secretary General of UNFPA there are two amazing girl ambassadors from Africa

– Satta Sheriff from Liberia (in the picture with me) and Rebeca Gyumi from Tanzania.  Do listen to them!   Satta is a member of the Children’s Parliament in Liberia while Rebeca lobbied her Government to introduce legislation to raise the minimum age of marriage in Tanzania to 18 years in July of this year.  Suman Shakya spoke about a new way of collecting data in Nepal and Karen Peterson from the USA was promoting STEM subjects for girls.

Watch and sing along with the Global Girls Film 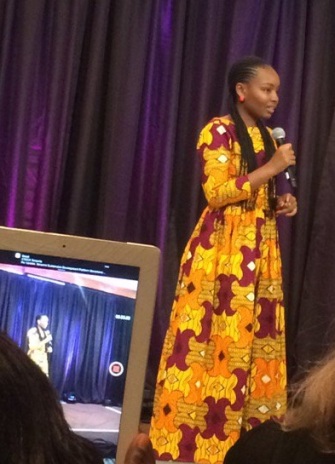