(Met some friends at the film)

Last evening a 40 minute film was premiered in New York and will be launched today across the globe.  It is a new phase in the climate movement.  It is the story of four communities preparing to participate in Break Free from Fossil Fuel actions in May 2016.

This is a natural continuation of  COP 21 which was held in Paris last December and the signing of the Paris Agreement at United Nations headquarters on Friday April 22nd, 2016.

It could be part of your celebration of Laudato Si which was published one year ago.  Naomi Klein is also interviewed on this film.  Have you read her book  ‘This Changes Everything’?

The Permanent Observer Mission of the Holy See to the United Nations hosted an event on Ending Human Trafficking by 2030 at the United Nations Headquarters in New York.  The event is over three hours long and made up of a number of panels.  It is a very informative event.  The panels included a keynote panel, followed by a panel on ‘The Scope of the Problem and the Opportunities it Provides.’  The third panel  focused on ‘What Is Being Done To Address the Problem in a Coordinated Way,’ followed by ‘Insights from Member States’ and closing.  Link to the Web cast 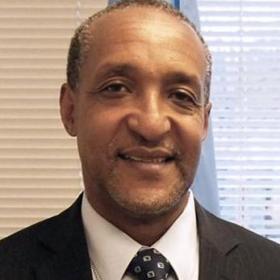 The most outstanding speaker for me was H.E. Macharia Kamau, Kenya’s Ambassador to the United Nations and one of the Co-Chairs of Open Working Group on Sustainable Development Goals. See the full Program of speakers. Ambassador Kamau of all the speakers identified clearly what needs to be done to bring about change. He spoke from his experience. The resistances referred to are real and constitute the challenges that must be addressed.  If you wish to listen to his address move the marker to 3.01 approx.  Ambassador Kamau said ‘it is interesting that we are having this conversation this evening on modern slavery because when I was working for the Sustainable Development Goals, which I was co-charing, you cannot imagine how difficult it was to get these key issues on board. When working on 8.7 it took the direct intervention of the Pope himself – I was sitting there and I know because I scripted it.  These issues were incredible complex, but I am thrilled to see all are on board, and wanting to get on with the business of finishing this scourge from the face of the earth.

For us,  those of us of colour, this is not something we see as a modern phenomena. It is deeply rooted in our history, and our being for over 500 years. There is a monument outside, dedicated to modern slavery, slavery period really – transatlantic slavery, but it could equally be the Indian Ocean Slavery. I don’t know if many of you have seen it?  It took the United Nations  almost 70 odd years to mobilize the gumption to actually put it there.  You would not believe the amount of resistance we have faced over the past 10 years to have a monument to slavery, here at the United Nations.

I am thrilled that there seems to be such voices speaking for this issue and that everyone is finally on board on this issue.  Indeed the Pope was clear, the Pope was clear on many other things too – climate change, inequality, and I want you to know that we were confronted by a huge amount of resistance to have these issues included.  Issues of slavery, of human trafficking, are horrific issues that have deep roots in history, and has deep roots in our psychology. It represents a racism, misogyny, horrible prejudices that have warped the way in which the world functions, to this very day.

8.7 is just a target.  8.7 is a target among 169 other targets.  But I can assure you that 8.7 will mean absolutely nothing, if we are unable to take care of other fundamental challenges that have to do with the way we as  human beings reach out to each other.  How are we able to allow and facilitate the development of all society so that within our countries  inequalities disappear.  Besides those people who are trafficked are trafficked from our countries and they are going to destinations that are in our countries.

We have to take structural responsibility for this.  All the legislation, and good will in the world, if not followed by change of will and a change of mentality, as to how we treat each other, and as to how we embrace each other as human beings,   will mean in the end that we will not succeed.

I am afraid, whether we are talking of unemployment, inequality, issues of gender or climate change which has a direct impact on forcing people into slavery, as their land becomes destroyed – when, the where with all to live off that land is decimated by drought, it is impossible that you expect that these people will not be carted off into all kinds of exploitation, including modern slavery

My message to this forum – yes 8.7!   8.7 helps us to focus,  but 8.7,  this is only symptomatic of a  fundamental and structural challenge that faces us human being, and us as a collective global society.  Somehow, we have to find the belief and the determination to undertake the real structural transformation that is needed in our societies and economies in order to be be able to do what it is we claim to be doing to combat abuse, slavery and exploitation of one human being by the other.

Nuncio, I could tell you about what Kenya is doing – we have legislation of all kinds and acts on the books for a long time.  I bet that Nigeria has probably as many as we do, but if fundamentals do not change, nothing will change.  My sincere hope is that the Pope will continue to focus all our attentions on this issue, in his way, in a manner that challenges us to go beyond the issue of slavery which is a horrific issue, but touches on the way in which we receive each other, embrace each other and ultimately give a space to each other to live in this world as equal being.”

You might ask what is 8.7 ?  This is a way of referring to Sustainable Goal 8   ‘Promote inclusive and sustainable economic growth, employment and decent work for all’

and Target 7  ‘Take immediate and effective measures to eradicate forced labour, end modern slavery and human trafficking and secure the prohibition and elimination of the worst forms of child labour, including recruitment and use of child soldiers, and by 2025 end child labour in all its forms.

Other Highlights:  Ms Dona Hubbard witnessed to her personal experience.  An inspiration – see Marker 1.09.  Dona is a member of Airline Ambassadors International.

Imelda Poole of RENATE was a panelist see marker at 1.22 RENATE is a network of religious throughout Europe engaged in ministry to trafficked persons. 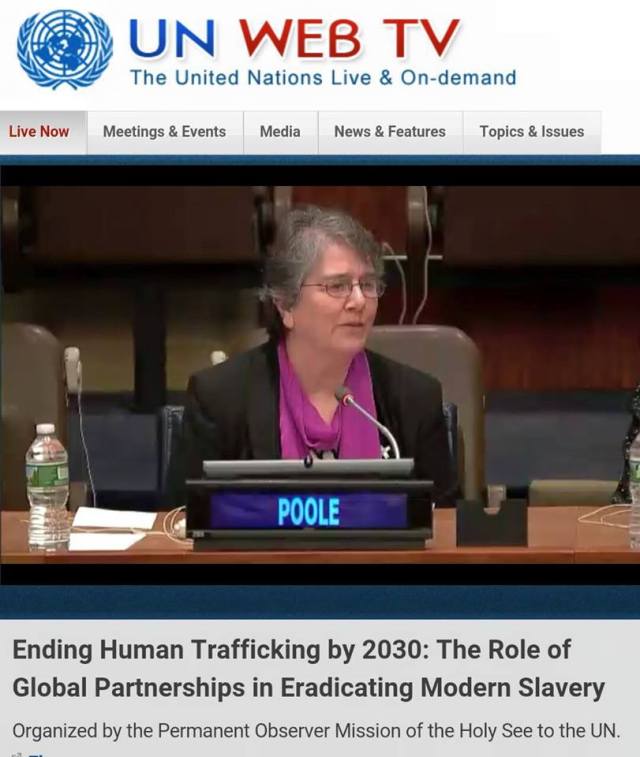 Human trafficking is mentioned in the 2030 agenda for Sustainable Development in two other places.  Paragraph 27 which is the declaration part of the Agenda states “We will seek to build strong economic foundations for all our countries.  Sustained, inclusive, and sustainable economic growth essential for prosperity.  This will only be possible if wealth is shared and income inequality is addressed.  We will work to build  dynamic, sustainable, innovative and people-centered economies, promoting youth employment, and women’s economic empowerment, in particular, and decent work for all.  We will eradicate forced labour and human trafficking and end child labour in all its forms…”   Goal 5 Target 2  states ‘Eliminate all forms of violence against all women and girls in the public and private Spheres, including trafficking  and sexual and other types of exploitation.”  Goal 16 Target 2 “End abuse, exploitation, trafficking and all forms of violence against and torture of children.” 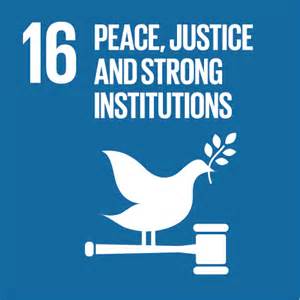 You might be wondering what SDG and 8.7 mean.  SDG is Sustainable Development Goal and 8 is reference to Goal 8 and 7 is a target within the goal.  SGD Target 8.7 calls on all to take immediate and effective measures to eradicate forced labour, end modern slavery and human trafficking and secure the prohibition and elimination of all forms of child labour as an essential step to achieving decent work for all, full and productive employment and inclusive and sustained economic growth .See the document published on February 12th for more information.

There is a diagram showing the intersectionality of the sustainable development goals in relation to Goal 8 “Promote sustained, inclusive and sustainable economic growth, full and productive employment and decent work for all”  and the target 8.7 above.