Thailand responds to the Trafficking in Persons Report  See the news report here  Good Shepherd Sisters are quoted at the end of the article. Has your country responded?   Find out what the TIP report says about your country  Here

Melysa asks how is the US faring at home? I am taking three quotes …

The Trafficking in Person Report 2014 is a good benchmark with regard to the global situation of trafficking in person for sexual exploitation and labour.  Each country is reviewed and evaluated.  Check out the report TIP 2014 and posted on this blog on June 21st.  Here is the response of Malaysia rejecting US findings Click here and another ‘Malaysia is serious about addressing human trafficking’ Click here to read more  What is happening in your country?  Is the report covered in your press?  Another report Click

Ruhama Press Release on the Trafficking in Persons Report See here  Thanks Sarah for your press release!

US State Department’s 2014 Trafficking in Persons Report calls on the Irish Government to hold traffickers to account and provide greater protection to victims.

The annual US State Department’s Trafficking in Persons (TIP) Report was launched in Washington DC today. Ireland ranks in the top tier (Tier 1) of the 2014 report for its compliance with the minimum standards for the elimination of trafficking.

On reading the report, Sarah Benson, CEO, Ruhama said: “We congratulate the US State Department for compiling another extensive report on the worldwide issue of human trafficking; highlighting in particular the progress but also importantly the shortcomings of countries, including Ireland, in their efforts to combat this heinous crime.”

Sarah Benson, continued: “As a front line service to victims of sex trafficking, we witness the human consequences where there are gaps in the systems to prevent trafficking, protect victims, and punish traffickers. We concur with many of the concerns outlined in this year’s TIP report, particularly those dealing with the identification and protection of victims. These concerns include the flawed identification process, the low quality of housing provided for victims and the cumbersome referral process.”

Sarah Benson said: “A number of the recommendations in the 2014 TIP Report echo those made in other reports including those from GRETA, the ESRI and the OSCE Special Representative for Combating Trafficking. There is now an excellent opportunity for the Irish government to build the progress and learning gained in recent years and take on board these recommendations when developing the new National Action Plan to Combat Human Trafficking.”

Sarah Benson went on to say: “We support the recommendations offered to Ireland by the TIP Report 2014, specifically calls to consider the need for funding increases to provide better services to victims in light of noted cuts in this area; and that the role of NGO’s needs to be formalised in the identification of victims, in cooperation with law enforcement.”

Sarah Benson concluded: “It is imperative, in addition to following these recommendations from the TIP report, that the unanimous Joint Oireachtas Committee for Justice’s recommendation to criminalise the purchase of sex is enacted in law.  It is this demand for prostitution that is directly fuelling organised crime and major human rights violations of women and girls in Ireland today.”

Further information: Link to Country Narrative in the US TIP Report 2014 http://www.state.gov/documents/organization/226846.pdf

“The TIP report is considered the benchmark index for global anti-trafficking efforts, as it ranks 188 nations according to their willingness and efforts to combat trafficking and slavery. However critics argue that it is coloured by US interests.”  To read the article click here   what do you think?

Find the full report at Here  Check out your country situation – have your local media covered the issuance of the report?  Here is an article from Ireland  – link from the Irish Examiner Click  The report, which was published yesterday, said: “Foreign trafficking victims identified in Ireland are from Nigeria, Cameroon, the Philippines, Poland, Brazil, Pakistan, South Africa, Lithuania, the Democratic Republic of the Congo, Zimbabwe, Kuwait, and other countries in Asia, and Eastern Europe.”  “There has been an increase in identified Irish children subjected to sex trafficking within the country.”  Sarah Benson, the chief executive officer of Ruhama, which supports women affected by prostitution and trafficking, said: “We concur with many of the concerns outlined in this year’s TIP report, particularly those dealing with the identification and protection of victims.”

Tell us what your country is saying about the report?  We hear from Malaysia that they have dropped to tier 3 – the lowest level –  Tier 3 countries do not fully comply with the minimum standards and have not shown the US they are making significant efforts to do so.
Apart from the three other countries which had been downgraded, Malaysia joins a Tier 3 list of countries which comprises Algeria, Central African Republic, Cuba, Democratic Republic of Congo, Equatorial Guinea, Eritrea, Guinea-Bissau, Iran, Kuwait, Libya, Mauritania, Korea, Papua New Guinea, Russia, Saudi Arabia, Syria, Uzbekistan, North Yemen and Zimbabwe.

TIP Heroes are celebrated among them Irene Fernandez.

The page dedicated to Irene Fernandez, a Malaysian activist who was devoted to the plight of the immigrants and victims of human trafficking. – Pic courtesy of US State Department website, June 20, 2014.

There are stories of 12 victims from 12 countries.  Check and see if your country is mentioned.   Click here

There is a section on topics of special interest.  It is interesting and easy to read See what they are!  One topic named is ‘Human Trafficking and Major Sporting Events – Major sporting events—such as the Olympics, World Cup, and Super Bowl—provide both an opportunity to raise awareness about human trafficking as well as a challenge to identify trafficking victims and prosecute traffickers who take advantage of these events. Successful anti-trafficking efforts must be comprehensive and sustainable, addressing both labor and sex trafficking conditions before, during, and after such events.’  See this section as there maybe something specific to your country.

Angola, Bangladesh,  Congo, Republic of, Czech Republic, Japan, Korea, Republic of, Nepal, Pakistan, Singapore, Sri Lanka, Sudan, are countries were we are present. These countries are NOT States Parties to the Protocol to Prevent, Suppress and Punish Trafficking In Persons, Especially Women and Children, Supplementing the United Nations Convention Against Transnational Organized Crime!

In the closing note the following is quoted:  “In May 2014, the International Labour Organization released a groundbreaking report estimating that victims of this crime generate a staggering $150 billion in profits per year for the private global economy: $99 billion in the sex industry and $51 billion in other sectors. Despite improvements made by many governments to address human trafficking, these crimes remain low risk/high profit ventures. Countries must do more to close off these zones of impunity.”  Read more   Profits and Poverty: The Economics of Forced Labor (2014) was posted on June 2nd.

Another commentary   The US downgraded Malaysia, Thailand and Venezuela …

Sam K. Kutesa, Uganda’s minister for foreign affairs was unanimously elected by acclamation as President of the 69th Session of the United Nations General Assembly. 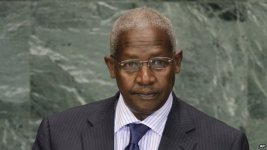 As president, he will preside over the General Assembly for a one-year period, starting 16th September, 2014 for which he has chosen the theme: “Delivering on and Implementing a Transformative Post-2015 Development Agenda”.

Ambassador Samantha Power, U.S. Permanent Representative to the United Nations, on the Election of Sam Kutesa made the following statement which echoes our priorities and the sort of transformative agenda we wish to see for girls and women.  I quote “The UN Charter places respect for human rights and dignity at its core, and it is the job of the General Assembly — and its President — to uphold these principles. At a time when girls are attacked by radical extremists for asserting their right to an education; representatives of civil society are harassed and even imprisoned for their work; and lesbian, gay, bisexual, and transgender people are endangered for who they are, including by discriminatory laws, the work of the United Nations to advance equality, justice, and dignity for all could not be more urgent. In the face of these challenges, all of us working in and at the United Nations should recommit to vigorously defending these core principles.”  Full statement available here

Beijing+20: WHAT?  An interactive dialogue with young people about gender equality and women’s empowerment in the post-2015 context.  Four Girl advocates of the Working Group on Girls were among the panelists – Julia, Christina, Lizze, and Lizzie.  This dialogue took place within the 2 day ECOSOC Youth Forum of June 2 and 3. Girls from YWCA, Girl Scouts USA and a girl representative from Austrian youth were also panelists. Their linking with the issues of Beijing and bring them into the post 2015 Development Agenda debate was excellent.  The event was webcast  Link to webcast

Executive Director of UN Women, Phumzile Mlambo-Ngcuka invited the girls to share with her on the various themes.  You can read her address Here

The following question were posed to he Austrian Youth delegate Johanna: What is your vision for education and how does it contributes to gender equality?   Tiffany is from the YWCA: What can we do to put an end to women’s lack of safety and violence against women?  Emily from the Girl Scouts: Why is environmental policies so important to girls and women world wide.  Is this something we need to include when looking at in the post 20 agenda?   Ameesha Girl Scouts USA: You have witnessed the discrimination of women and girls in families and you have identified it as a challenge in India.  You are a strong gender equality advocate.  What would you like us to change?  What actions can we take to make sure this happens?

Can you use this presentation to talk about Beijing? I think it is a useful tool. How would your women and girl groups answer these questions?

There is a very interesting sharing by an 18 year old man Joe Davis talking about women’s rights from a young man’s perspective.  See move marker to 43:30

The Good Shepherd International Foundation on their Facebook page have a posting on the UN ECOSOC Youth Forum.  See

A new report from the ILO investigates the underlying factors that drive forced labour, of which a major one is illegal profits.  Figures will include a breakdown of profits by area of forced labour and by region. Per capita profits are highest in commercial sexual exploitation, which can be explained by the demand for such services and the prices clients ar willing to pay, and low capital investment and by the low operating costs associated with this activity.  Read more in  English    Spanish   French

How is forced labour defined?   A definition of forced labour enshrined in the ILO’s Forced Labour Convention, 1930 (29) adopted in 1930 reads ‘the definition encompasses all forms of work or service, whether formal or informal, legal or illegal. Forced labour also requires an element of coercion (“menace of penalty”) to distinguish it from labour exploitation more broadly. The free and informed consent of workers throughout the labour relationship is another important element of the definition. Convention No 29 requires member States to make forced labour a penal offense; hence the exaction of forced labour is not a minor labour law violation but a criminal act. As such, it is closely related to the concept of human trafficking as defined by the UN Protocol of 2000 to Prevent, suppress and Punish Trafficking in Persons, Especially Women and Children, Supplementing the United Nations Convention Against Transnational Organized Crime. The Protocol makes trafficking in persona a criminal offence. All exploitative purposes of trafficking are covered by the ILO’s Forced Labour definition with the exception of trafficking for the purpose of the removal of organs. (page 3)