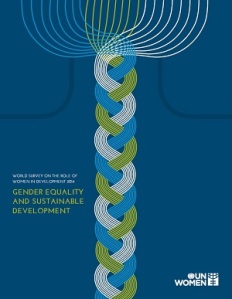 UN Women released on October 16th its new report, the World Survey on the Role of Women in Development 2014:  Gender Equality and Sustainable Development.  Read more

The event was also webcast.

There was another event which I attended.  The contributing authors of the report spoke –  Melissa Leach, Director of the Institute of Development Studies, University of Sussex, UK, lead author; Isha Ray, Professor of Energy and Resources, University of California, Berkeley, contributing author; Hilal Elver, UN Special Rapporteur on the Right to Food; and Zenebework Tadesse, independent researcher, Ethiopia.

The report is situated in the every day of reality of girls and women cooking and eating, breathing, urinating and defecating, studying and working in the night – these are all environmental acts.  Everyday activity affects the environment.  Care of the environment in the report is seen from the toilet not the stratosphere.