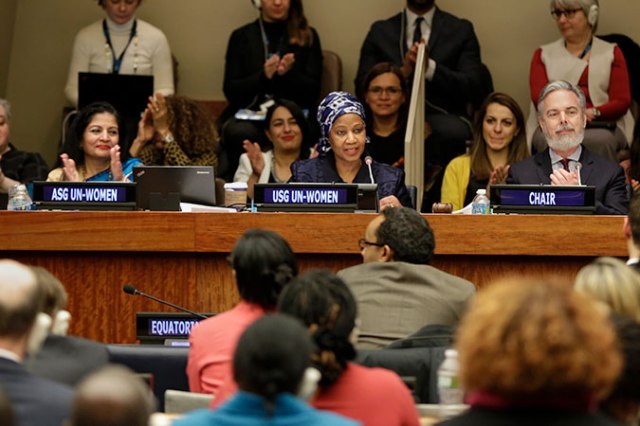 The Commission on the Status of Women 61st session ended on Friday afternoon March 24th with Agreed Conclusion – a consensus document on ‘Women’s Economic Empowerment in the Changing World of Work.’ This in itself is an achievement.  The document is not yet published and was presented on Friday as an informal paper in English only. The negotiation of this document is an arduous work (the Australian delegated noted it was 107 hours of discussion) and its accomplishment is the result of long hours of discussion and negotiation, into the early hours of the morning each day of the second week.  A good overview of the situation can be had by listening to the UN TV  Webcast of the closing session.  It is about one and a half hours.  By listening to the webcast you will see how issues that affect  women and girls is highly political and fraught with all sorts of qualifications captured in the phrases such as according to ‘national laws’; ‘social norms’ does not enjoy global consensus   …. and the terms ‘sexuality’ is not acknowledged in national law or jurisdiction by a large number of member states nor in International law; express reservations on all principles that are not in accordance with the spirit of Islamic law. Another expression was that anything in the text of the agreed conclusion not in line with national laws is null and void and not applicable.  The Australian delegate noted that the discussion and link between SRHR and economic empowerment was profitable in coming to a process of understanding.  The Holy See interpreted the concept of ‘gender’ as being grounded in a person’s male or female biological sex, not in social constructions

The EU was largely disappointed with the outcome which it saw as an interpretation of the outcome rather than an negotiated outcome. Three issues were noted – limiting of the  space of CSO’s and NGO’s; the link between women’s economic empowerment and sexual and reproductive health and rights (SRHR) could be stronger by better references to the human rights component essential to gender equality; and emphasis on national policy space limited ambition and some language reflects the stereotypical role of women and girls and does not contribute to their empowerment and independence.  Despite this the EU will continue to work more to build consensus.

Here is the link to the US explanation of Position on Agreed Conclusions at the 2017 UN Commission on the Status of Women.

Reaffirms – the Beijing Declaration and Platform for Action; implementing the Beijing Declaration and Platform for action will make a crucial contribution to the implementation of the 2030 Agenda for Sustainable Development and to women’s economic empowerment; commitments to gender equality and the empowernment of all  women and girls made at relevant UN summits and conferences; that the promotion and protection of, and respect for, the human rights and fundamental freedom of all women and girls,  including the right to development , which are universal, indivisible, interdependent and iterated, are crucial for women’s economic empowerment…; that the realization of the right to education, as well as to access to quality and inclusive education, contributes to the achievement of gender equality and the empowerment of women and girls; the importance of significant increased investment to close resource gaps for achieving gender equality and the empowerment of all women and and girls.

Strongly condemens – violence against women and girls in all its forms in public and private spaces, including harassment in the world of work, including sexual harassment, and sexual and gender based violence, domestic violence, trafficking in persons and femicide, among others, as well as harmful practices such as child, early and forced marriage and female genital mutilation, and recognizes these are major impediments to the achievement of women’s economic empowerment, social and economic development…

Expresses it’s concern – about the continuing significant gender gaps on labour force participation and leadership, wages, income, pension and social protection and access to economic and productive resources; structural barriers  including discriminatory laws and policies, gender stereotypes and negative social norms, unequal working conditions as well as about the growing high incidence of informal and non-standard forms of employment in many regions; occupational segregation; that the feminization of poverty persists; over the persistently low wages earned by women workers;

Reiterates it’s concern – over the challenge climate change poses to the achievement of sustainable development and that women and girls are often disproportionately affected by the impacts of climate change.

The document is divided into the following sections:

w. Optimize fiscal expenditure for gender-responsive social protection and care infrastructure, such as equitable, quality, accessible and affordable early childhood education, child care, elder care, heath care, care and social services for persons with disabilities and persons living with HIV and AIDS, which meet the needs of both caregivers and those in need of care, hearing in mind that social protection policies play a critical role in reducing poverty and inequality, supporting inclusive growth and gender equality;

x.  Work towards establishing or strengthening inclusive and gender-responsive social protection systems, including floors, to ensure full access to social protection for all without discrimination of any kind, and take measures to progressively achieve higher levels of protections including facilitating the transition form informal to formal work; 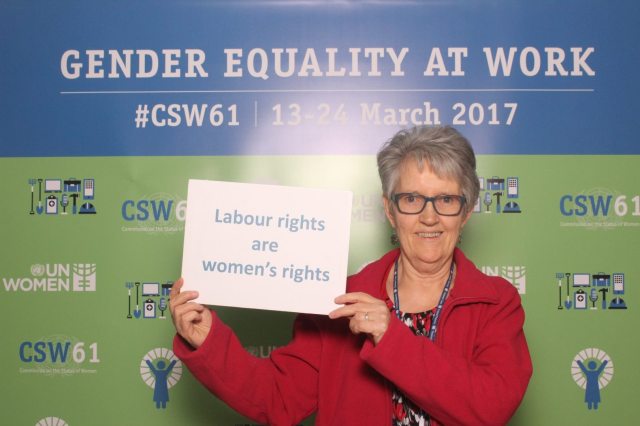 The Commission on the Status of Women 61st Session will open officially on Monday morning March 13th at  10.00 am in the UN General Assembly Hall. The NGO’s will start with Consultation Day on Sunday March 12 from 9.00 a.m. to 3.30 in the afternoon.  Already participants are beginning to arrive delegates from the various member states and groups of women from all over the world.  8,600 people have pre-registered to attend – a record number.  Yesterday afternoon the Chair of the Commission H.E. Mr. Antonio de Aguiar Patriota (Brazil), gave a final briefing to NGO outlining what is planned.  Of particular interest to me was information on the current status of the outcome document.  The first reading is completed.  Ms. Fatma Al Zahraa Hassan (Egypt), is the chair for the negotiations.  This first reading was based on the compilation text of February 28   We are awaiting a new version based on the first reading.

This years’ CSW  is breaking new ground addressing the issue of women’s unpaid care work.  It was noted that there is a lot of similar language and common ground  in a document that went from 6 pages to over 70 pages.