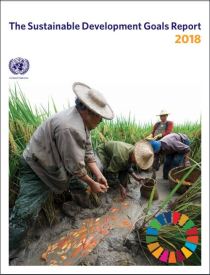 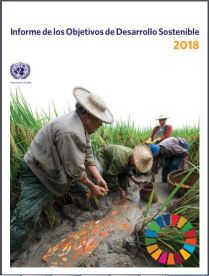 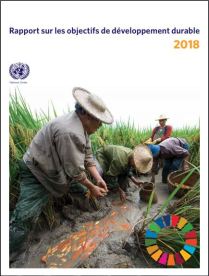 This report is 40 pages, with some nice graphics and information concerning each of the 17 sustainable development goals 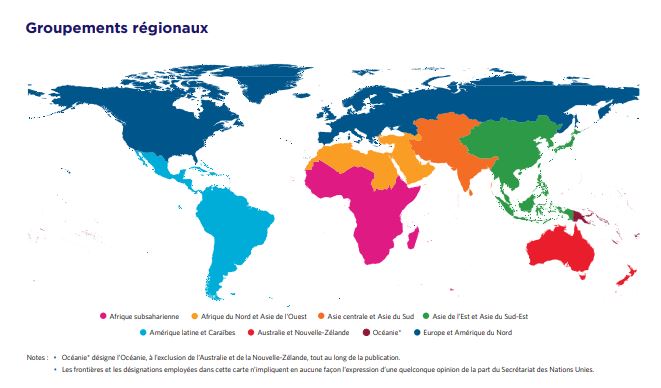 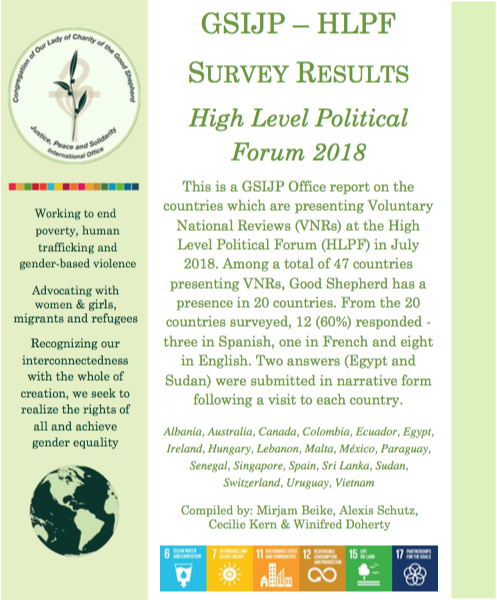 On May 23 the President of ECOSOC H.E. Marie Chatardová, Permanent Representative of the Czech Republic, held a Special Meeting entitle “Towards sustainable, resilient and inclusive societies through participation of all.”   Here is  the Agenda for the meeting.  I was privileged to have Joan Wu accompany me to this meeting. It was a full day.  The panelists were excellent and provided a wide range of perspectives and suggestions.  See who’s who in the  Biographies of the various panelists.  The ones that interested me most were H.E. Amina Mohammed, Deputy Secretary General of the United Nations.  I liked her capturing of the 2030 Agenda for Sustainable Development as ‘an agenda of the people, by the people and for the people, and it is an agenda to be achieved with the people.’  To conclude Her Excellency said  ‘The 2030 Agenda needs the participation of all actors to ensure no one is left behind and that all can enjoy prosperity, dignity and opportunity in a world of peace.  Let us, therefore, join our efforts for a sustainable, resilient and inclusive future.’   A summary of Session 2 and 3 can be read HERE   If you prefer see and hear the WEBCAST   I added to the discussion see marker 1:18 focusing on ‘leave no one behind.’  “Many of the people whom Good Shepherd represents are outside the political arena.  Until such time as we address the divide that exists between this meeting here this morning and the people I represent in these countries,  whom I say are outside of the political arena,  I don’t think we will have movement and progress because of  growing inequality,  threat of conflicts, climate change and disasters, as some of the panelists have already noted.   We have to walk the talk by putting the resources at the most vulnerable, most excluded groups and bringing them into the political arena to talk about how they wish to participate and what can be done in these situation.  They work in groups in terms of their own empowerment but are not contributing to local and national development.   I would like to raise this issue this morning in the light of moving forward.  Thank you.”

Michale Shank the moderator of panel two offered 7 c’s with regard to citizen participation and community engagement.  Tactic (1 and 2);  Objective (3 and 4);  Process (5)  and Results (6 and 7)

Do you know about participatory budgeting?   This was presented by Francesco Tena.  Check out Participatory Budgeting

What is e-governance and e-participation?  Listen to Dr Aroon Manoharan.

Session 4 was in the afternoon – a good opportunity to hear Andrew Gilmore,  Assistant Secretary-General for Human Rights, Head of New York OHCHR Office.  Human Rights are paramount.  Session 4   I was interested to know that sometimes Parliaments don’t know about ‘Voluntary National Reviews’ (VNR’s) and it was noted by Tomáš Rákos that participation would be much more robust if quality civic education was imparted to all coupled with the existence of trust between people and government!

Toward the end of this panel Margaret O’Dwyer,  Daughters of Charity were able to share SEE 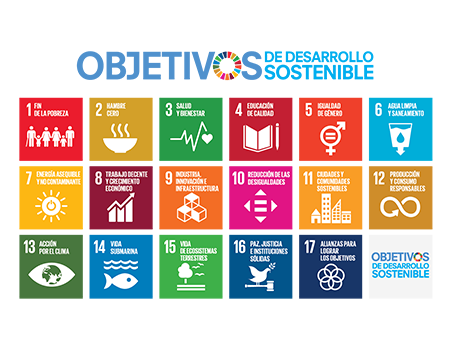 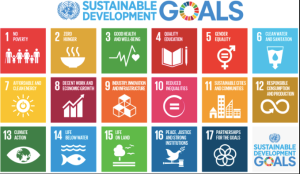 Accompanying the path of the Crucified through the SDGs

This is the translated text of the Spanish and pictures are not included.  Thank you Rohan Dominic of the Claretians!

The UN Women and UNEG (United Nations Evaluation Group) have developed a guideline in 5 languages to evaluate the SDGs with a gender lens. Link to English, Arabic, French, Russian and Spanish

Another excellent resource linking the SDG’s with various human rights mechanism has been published by the Danish Institute For Human Rights.  It too, is is multiple languages and has an interactive dimension – you can choose a goal or target and see the linkages to human rights. 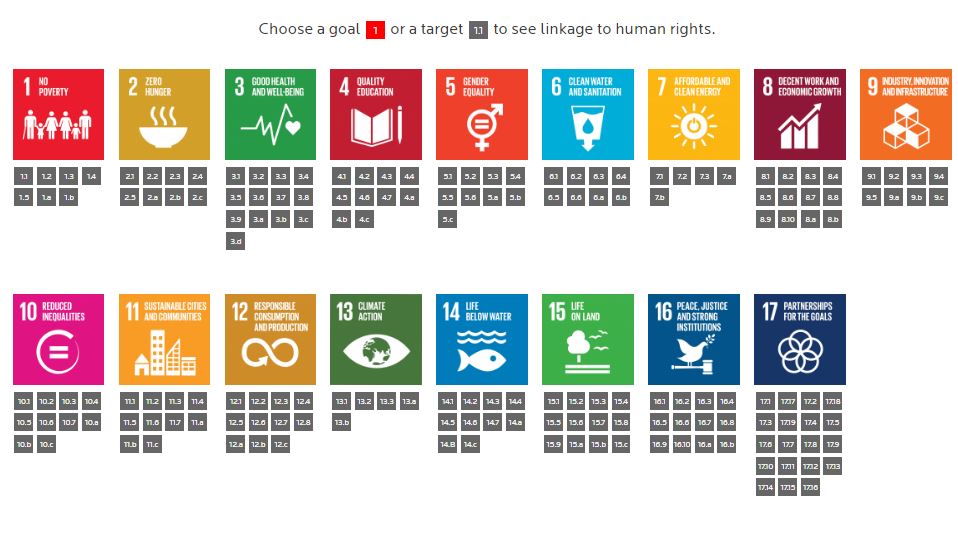 It’s September 2017, two years have passed since the SDGs were adopted but where are we at now? Are governments delivering on what they promised?

Increasing conflict and inequality, unprecedented levels of migration and displacement and the devastating effects of climate change are some of the issues that define our age. Extremism and disenfranchisement fuel reactive political movements with chaotic and dangerous outcomes.

These are issues that go beyond country borders and require concerted efforts around the world. To tackle these issues governments agreed to the Sustainable Development Goals on 25 September 2015 and now on the second anniversary we ask you to join us to #Act4SDGs!

Yesterday, July 19th the HLPF ended with the adoption of the Ministerial Declaration but not without some challenges.  A vote was requested on paragraphs 4 and 21. Both paragraphs were retained the controversial issues being ‘self determination of people living under foreign occupation and language on multilateral trading systems.  A full account of the session can be READ HERE

Paragraphs 20 recognizes that despite some positive development more is needed – coherent policies and an enabling environment for sustainable development at all levels by all actors. The following listing is provided:  difficult macroeconomic conditions, low commodity prices, subdued trade growth and volatile capital flows, but  also natural disasters, climate change, environmental degradation, humanitarian crisis and conflicts.  Having said that yet there is conflict over paragraph 21.

The retention of the whole document is a step forward and much advocacy took place to ensure that there was a ministerial declaration. 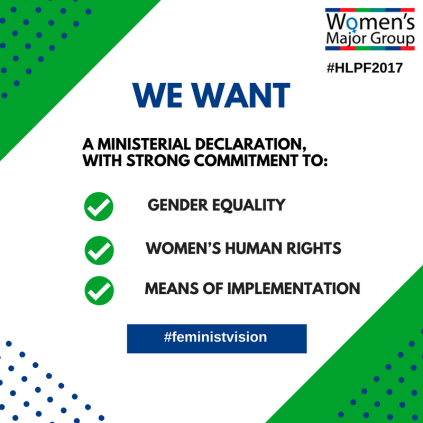 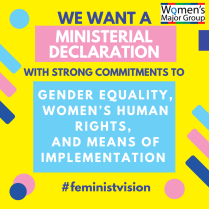 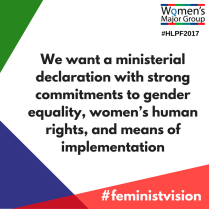 During the negotiations I had the following Advocacy Points   Reviewing the ministerial declaration you will see that they were not included.  The most disconcerting one is the continued mention of ‘targeted measures’ in paragraph 14 in the context of a declaration to eradicate poverty, accelerate the pace of implementation, and decisive action is imperative and in response the best we can do is ‘targeted’ measures!  While children and youth are recognized within the Major Group system and there are stakeholders on aging and people with disabilities and a strong emphasis on a life cycle approach I continue to hold that girls are most vulnerable to being left behind and being the ones furthest behind. 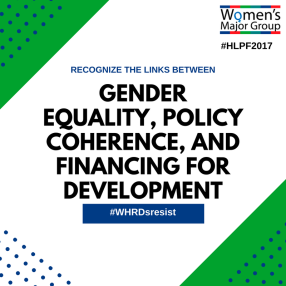 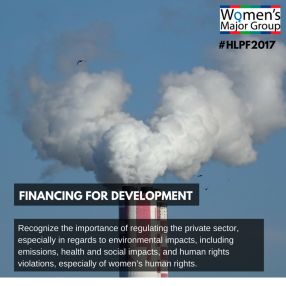 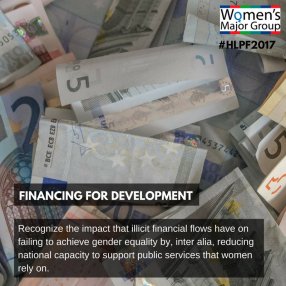