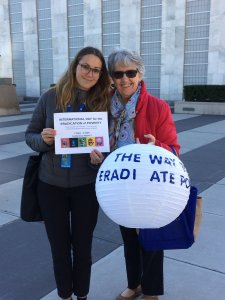 This is the spirit of the day – coming together to ensure that human rights be respected’ quoting from Fr. Joseph Wresinski.  He was born to immigrant parents on February 12th, 1917 in Angers, France and knew the Congregation of Our Lady of Charity of the Good Shepherd as a child, serving Mass each morning in the Contemplative Community.  He founded the organization International Movement ATD4th World.  We were celebrating 100 years of his birth and more. Each year since 1987 – 30 years – the International Day has been celebrated at the United Nations stemming from a Resolution proposed by  tow UN Member States – France and Burkina Faso and adopted by the General Assembly inaugurating October 17th as the International Day for the Eradication of Poverty.

This was my 11th time celebrating this day at the United Nations with ATD4th World.  My first experience was at ‘the commemorative stone’ on the North Lawn in 2007  and part of this celebration was at the commemorative stone which has now been replaced following the UN building renovations.   Below is a good photograph of the restored stone and the words of Fr Wresinski. 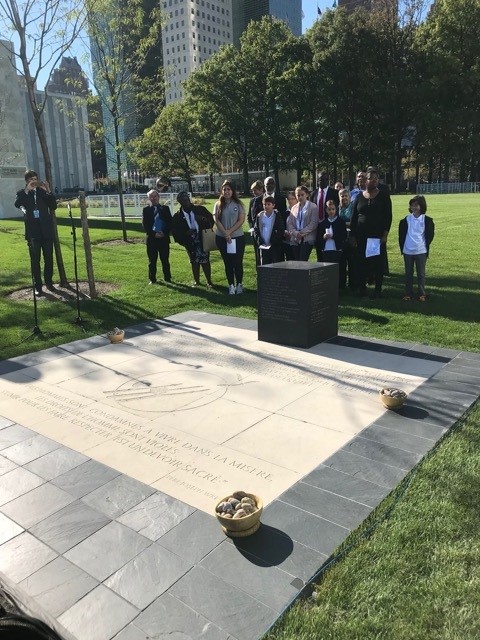 You can see baskets with stones on the corners – each participant at the celebration was invited to take a stone home with them.  This is my stone.

A group photo of all the participants.

Your UN Representative Winifred and Cecilie at the stone  – STOP POVERTY

The UN Webcast has the full recording of the event in Conference Room 2 when people living in poverty (this year from around the world)  take the microphone and speak truth to power – experiences of  humiliation, stigmatization, exclusion, inhumanity, disrespect, marginalization and the words  @JosephWresinski, to those in poverty: “Demand that the world learn from you and your courage” #EndPoverty #StopPoverty #IDEP2017

Event entitled “Answering the Call of October 17 to end poverty: A path toward peaceful and inclusive societies” (on the occasion of the International Day for the Eradication of Poverty (A/RES/47/196)) (co-organized by the Permanent Mission of Burkina Faso and France, in collaboration with the Department of Economic and Social Affairs (DESA) and ATD Fourth World)

Webcast   17 Oct 2017 – Event entitled “Answering the Call of October 17 to end poverty: A path toward peaceful and inclusive societies” (on the occasion of the International Day for the Eradication of Poverty (A/RES/47/196)) (co-organized by the Permanent Mission of Burkina Faso and France, in collaboration with the Department of Economic and Social Affairs (DESA) and ATD Fourth World) 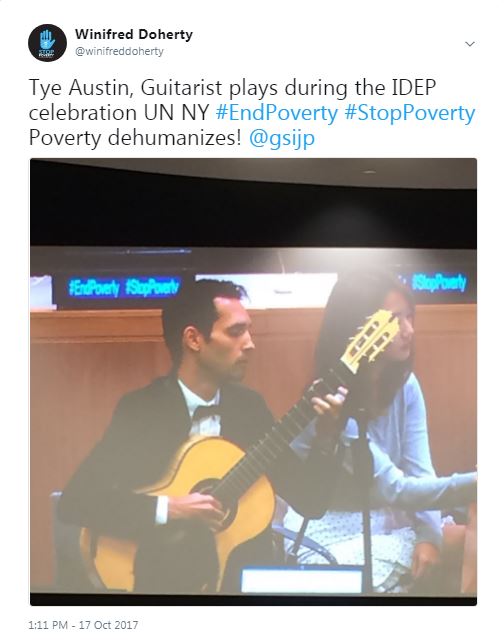 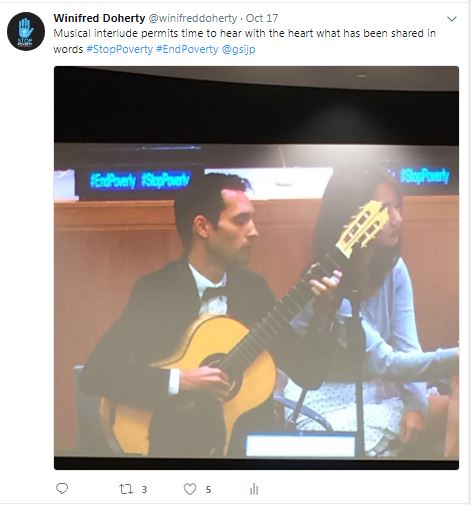 Another moment of insight for me – read the tweet …

The STOP Poverty Campaign did not end today!  No, there was renewed commitment to ‘ALL TOGETHER IN DIGNITY.’

A video live stream is available HERE  We need to hear the voices of the people. 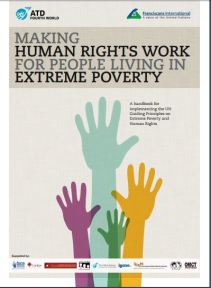 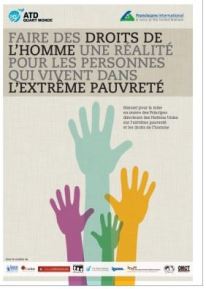 Poverty, inequality, discrimination – Let’s stop human trafficking at the roots.   Three United Nations human rights experts* today called for a concerted global response to fight the transnational scourge of trafficking in persons, speaking ahead of the European Anti-Trafficking Day on Saturday 18 October. – Read the full text here  Of specific interest to Good Shepherd is the following quotation “All over the world, child trafficking – often connected to the sale and sexual exploitation of children – is on the rise as a proportion of all human trafficking. Detected cases of child trafficking represent 27 per cent of human trafficking. And, in recent years, the increase has been greater for girls: two out of every three child victims are young girls.”  “…eradication requires coordinated efforts to address its root causes across multiple sectors. It is of paramount importance that countries of origin, transit, and destination, work together to tackle poverty, inequality, discrimination, and other factors causing vulnerability.”  In my panel presentation on Thursday 16th October – part of the events for the international day for the eradication of poverty I focused also on root causes.    Poverty is a consequence, a symptom that something is not working well. Even with 100% attention to ‘poverty as a condition’ this does not address the symptom – because the systemic and structural root causes of poverty are not addressed. The trickle down theory of economics has not changed the situation of poverty. Unfortunately even the development of the new post 2015 sustainable development goals which is underpinned by hopes and desires for a bold and transformative agenda, ‘leaving no one behind – stops short of the structural and systemic changes necessary to address growing inequalities. Poverty is the result of sets of policies at the macroeconomic level coupled with deeply entrenched, attitudes and mindsets – Patriarchy, Power Over, Control, Greed and Lust resulting in the denial of human rights of girls and women, experienced in all forms of Violence Against Girls and Women – Domestic Violence, Poverty, Sexual Abuse, Human Trafficking and Prostitution.

We congratulate both rapporteurs on their appointments, support them in their mandate and wish them every success.  I wish to include also Philip Alston the new rapporteur for extreme poverty and human rights.  I met him on Thursday evening when he addressed law students at NYU (New York University)

A Panel discussion was held on Thursday October 16th in the ECOSOC, UN 16 Oct 2014  – “Beijing+20 Leaving No One Behind: Women, Poverty and Participation”.  It was co-organized by the International Movement ATD Fourth World and the United Nations Millennium Campaign.  The NGO Committees on the Status of Women, Social Development and the Subcommittee for Poverty Eradication .collaborated in the organization of the discussion.  The panelists brought together a broad range of topics and experiences around poverty, women and empowerment, while looking forward to the celebration of Beijing +20 and the new post 2014 development agenda and sustainable development goals.  The discussion was webcast.  Click here 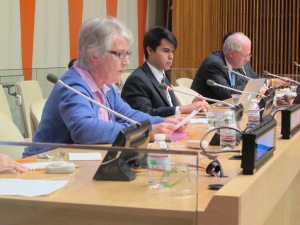 It is always a privilege to share panel space with people who have experienced poverty.  Alvenia Hutton was one such person, a single Mum from Brooklyn.

The Permanent Representative of Ireland to the United Nations H.E. David Donoghue  was a ‘keynote’ respondent.

On the right of the Ambassador is Ravi Karkara,  the global focal point for MyWorld2015 UN Global Citizen’s Survey and co-chair of the policy strategy Group on WorldWeWant2015 citizen’s e-platform. Have you completed the survey on My World.  It is not too late to do so.  You choose 6 items from a range of 16. There is a space for your priority.   Vote here

The other speaker on the panel – Ms. Lakshmi Puri is Assistant Secretary-General of the United Nations and Deputy Executive Director of UN Women.

These are busy days at the United Nations.  So much is happening simultaneously.  Today is dedicated to the celebration of people living in poverty. The Secretary General Ban Ki Moon attended the celebration today at 1.15.  The link to the webcast is here Click here 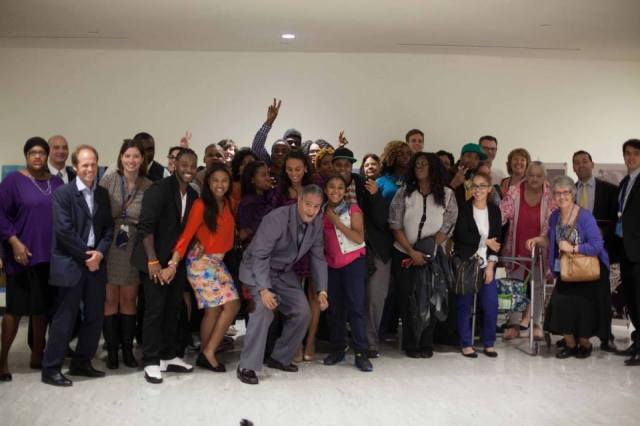 A group photo following the commemoration in the space of the art exhibit at the United Nations.

Commemoration of the International Day for the Eradication of Poverty is celebrated on October 17 each year.  You can view the event here Commemorative Stone at the United Nations, New York was unveiled in 1996 and has the following words

“WHEREVER MEN AND WOMEN ARE CONDEMNED TO LIVE IN EXTREME POVERTY, HUMAN RIGHTS ARE VIOLATED. TO COME TOGETHER TO ENSURE THAT THESE RIGHTS BE RESPECTED IS OUR SOLEMN DUTY.”

Violence and Poverty are interrelated say Marta Santos Pais, Special Representative of the Secretary General on Violence against Children. There are some very moving sharing in this webcast.

This year’s official commemoration on 17 October at UN Headquarters will be an occasion to recognize people living in poverty as critical partners for fighting the development challenges we face. The commemoration at the UN is organized in partnership with the International Movement for ATD 4th World,  the NGO Sub-committee for the Eradication of Poverty and the UN Department of Economic and Social Affairs, supported by the Missions of France and Burkina Faso to the UN.

Watch persons affected by poverty share their views at the official commemoration at UN headquarters,     Live on UN Webcast 1.15 to 2.30 EST to day October 17th.

Rose Lizarde, Global Director of the Feminist Task Force writes today is also a day to honor the work we do as women’s rights activists, as social justice transformers, as contributors to durable peace. We share this video as part of GCAP’s Leave No One Behind which of course we’ve tweaked to emphasize:  LEAVE NO WOMAN BEHIND

AND I ADD TO THAT MESSAGE

LEAVE NO GIRL BEHIND!