You may well ask what is the ‘Marrakech Compact’? It is the new name for the Global Compact for Safe Orderly and Regular Migration adopted in Marrakesh, Morocco on 10 and 11 December, 2018 and again adopted by the General Assembly of the United Nations on 19 December, 2018 following a vote.

The Congregation was represented by Cecilie Kern, (right) from the GSIJP Office in New York, and myself Donatus Lili, the NGO Regional Designate for RIMOA.

The conference was preceded by side events organized by Civil Society Organizations and  Member States in conjunction with the United Nations. I attended 3 side events at Palmeraie Golf Palace in Marrakech, the official  venue for the adoption of the Global Compact on Migration. (GCM)

In the open discussion following one of the panels, I asked the representative of the

government of Sri Lanka, what recommendations he would make to governments in the Middle East on developing effective policies and measures to protect migrants’ rights with regard to religious tolerance as persons of African origin have been denied right to practice religion and obliged to wear the Muslim attire.  Further some women domestic workers are subjected to sexual exploitation by employers, endure  harsh working conditions, and only receive minimal salaries.

The response indicated that countries of origin need to teach migrants about their rights, in particular with regard to salaries and ensure that they know how to get help if needed during transits, or in the destination country.

Of the 193 UN Member States, 164 were present in Marakesh for the  adoption the Compact. Members expressed dissatisfaction and stated that while the compact is non- binding it highlights the obligation of every member state to formulate strategies and policies towards facilitating safe, orderly and regular migration.  The compact is a framework, a blueprint.

His Excellency, Antonio Guterres, Secretary General of the UN, in his opening statement challenged some myths and false information concerning the Global Compact for Migration and highlighted the need for everyone on the move to obtain formal authorization and that human dignity and human rights must be respected and upheld irrespective of status   To deny this – to vilify any group of people – is the road to dehumanization and horror.  Societies are stronger, more resilient and enriched, not threatened, by diversity.  Every member, every group, must feel valued as such and simultaneously feel they belong to the society as a whole. This is the way to counter the current groundswell of racism and xenophobia. 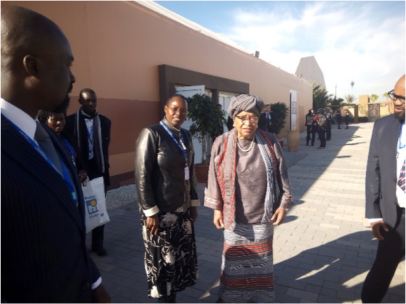 Ms Ellen Johnson Sirleaf the former president of Liberia and Chair of the High-Level Panel on International Migration in Africa delivered a key note on December 11, 2018. I had the honor of meeting her after the session.

Some personal reflections on the experience: 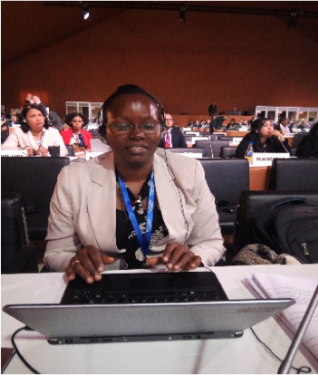 The Global Compact for Migration (GCM) is extremely new to me. While I had done reading I found it difficult to understand. Through my participation in the side events and presence at the official adoption by UN Members states I have some more clarity.  I was confused when the Secretary General stated, “GCM is non –binding” meaning every state is free to adopt or not.   I would have preferred a binding treaty agreement. On the same note, a non-abiding agreement leaves each state free to develop measures and policies to fulfil the 23 objectives.

who are engaged in migration policy and grassroots efforts.  Among these was Maria Pia Belloni, Chair, NGO Committee on Migration, in New York and UN Representative, World Organization for Early Childhood Education (OMEP)  See the NGO Committee Website for more information

My view on migration has changed.  I previously discouraged people from migrating but now I will ensure they have the correction information and migrate in a safe way using legal channels.  Statements that I heard indicated that a holistic approach to migration is necessary.  If there are well established frameworks it follows that the process works for all – including the migrant and the host country.

Congregation of Our Lady of Charity are privileged to have two members present at the historic conference to adopt the Global Compact on Safe, Orderly and Regular Migration. Louise Arbour said the intergovernmental conference is ‘an opportunity to launch an unprecedented process of cooperation to harness the benefits of human mobility. ‘

Cecilie Kern attended the Global Forum on Migration and Development 5 – 7 December and is joined by Donatus Lili from Kenya for the Intergovernmental Conference on Monday and Tuesday.

You can ready about the conference HERE  Last week we encouraged you to sign on to the Marrakech Women’s Rights Manifesto outlining the following concerns:   Participation, Non-Discrimination, End Violence, Safe Pathways, Labour Rights, Rights at International Borders and Equitable Development.  Today, Cecilie has joined with Civil Society partners on a statement that will be delivered at the opening of the Conference on Monday morning.  Once read it will be available for circulation.  As Monday is the 70th Anniversary of the Universal Declaration on Human Rights – what a great day to recognize and officially commit to implement the human rights of all migrants!  The flyer below has some details of the event to be hosted in Marrakesh. 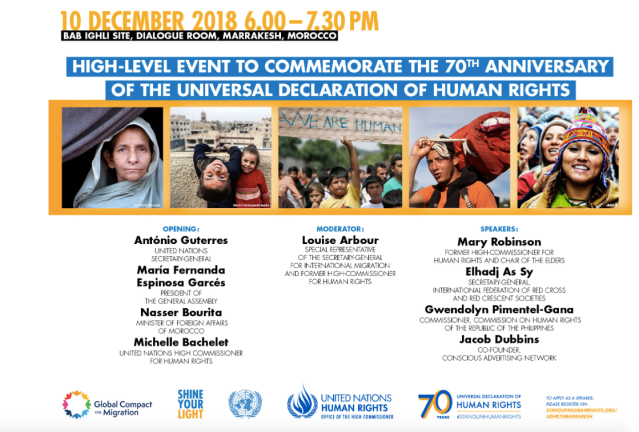 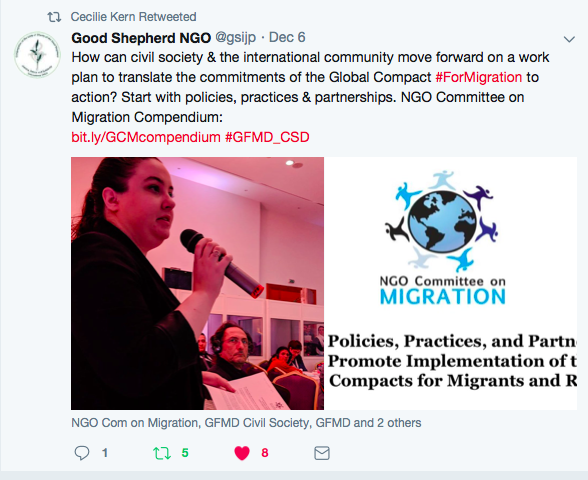 Some familiar faces from New York! 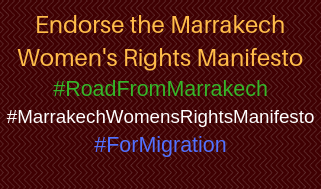 Women in Migration Network have a very informative website which may be of help to you as you follow the Intergovernmental Conference on Migration in Marrakesh to adopt the Global Compact on Safe, Regular and Orderly Migration.  There is one action that you can take – Endorses the Marrakesh women’s Rights Manifesto.  It is in a number of languages.  Click on this link for full details  Click on this link for full details   There are two ways to endorse the Manifesto – either individually or as an organization.

The first ever agreement on a common approach to international Migration in all its dimensions!

Click here to read the text of the Global Compact for Migration in your language of choice.

A one-page introduction to the Global Compact for Migration, available in English, Spanish, and French, including essential features of the purpose, development process, significance, political commitments, and implementation plan.

Good Shepherd over the years have attended the Global Forum on Migration and Development which is also taking place in Marrakesh, Morocco, December 5 – 7.  Cecilie Kern is attending this on behalf of us all.  Donatus Lili from Kenya NGO Regional Designate will join her for the intergovernmental Conference on the 11th and 12th December.

Share with us in the comments box your dreams and actions towards safe, orderly and regular Migration.  What do you consider most important?   Which one of the 25 objectives  is your objective?