CSW 60 commences on Monday March 14, 2016 at the United Nations Headquarters in NY.  The theme of the Commission this year is ‘Women’s empowerment and its link to sustainable development.’  The review theme: ‘The elimination and prevention of all forms of violence against women and girls.  This is a review of the implementation of the agreed conclusions from the fifty-seventh session of the Commission.    All the official event of the Commission will be Webcast live or you can choose to check up later .  This link will give you an overview and bring you to the various webcast

The Good Shepherd Statement to the Commission is on the website and listed among the official document of the session.  You can access one of the 6 languages into which it is translated HERE. The statement addresses the issue of prostitution and squarely names prostitution as a forms of violence against girls and women.  ‘A system of prostitution is “incompatible with the dignity and worth of the human person” as stated in the United Nations Convention for the Suppression of the Traffic in Persons and the Exploitation of the Prostitution of Others (1949).’   The continuance of the system of prostitution undermines both dignity of the person and equality.  Prostitution is enabled by a patriarchal system in which it is embedded.

On my way back to NY yesterday I watched two movies  Suffragette and I am Malala.   Suffragette is the history of ordinary women seeking to get the vote in the latter part of 19th and into the 20th century.  We all know the story of Malala and the right of girls to be educated.   As I think of these women and girls and the abolitionists of today with regard to ending prostitution or the threats levied against women human rights defenders around the world I wonder if much has changed! This is poignantly seen in the murder of Berta Cáceres  from Honduras for her environmental work.

Patriarchy, corporate power and finance  are very much interlinked.   The continuance of the system of prostitution which undermines both dignity and equality is propagated by commercial interests in sexual exploitation.   In fact, under patriarchy, we currently witness systems of commercial exploitation of women and girls being reframed as simply part of the market economy — the commercial sex industry — as if sexual slavery, inequality and gender-based violence are in some way extrinsic to this experience. The promotion of the commercial sex industry serves to legitimize prostitution, which is violence against women and girls.

‘Gender-based discrimination and inequalities, patriarchal structures that promote male sexual domination, and culturally imposed feminine gender stereotypes all contribute to the sexual exploitation of women and girls. These discriminatory attitudes inherently demean women, permitting objectification and commercialization and infringing their rights and dignity. The feminization of poverty and global migration patterns also foster the continuance of the system of prostitution of women and girls, abandoned widows and their daughters being a particularly vulnerable group.’

‘From long experience accompanying women who have been in prostitution, our organizations knows that prostitution is a form of gender-based violence that inflicts severe damage and risks the physical and psychological health of women and girls. It is the exercise of power and control of male access to female bodies from female genital mutilation to child marriage; from domestic violence to reproductive rights. The exchange of money for such access does not eliminate the violence women face in prostitution or the sex trade. We know that prostitution is a lucrative business, mostly controlled by criminal groups, and it is tightly linked to trafficking of women and girls for sexual exploitation. The theoretical separation of the violence of trafficking and the inherent violence of prostitution serves only the criminals and profiteers; they are not separate phenomena. They are inextricably entwined with gender inequality and male dominance and the continued debasement of women.’

I have ended up quoting much of our statement to the Commission.  Much of my advocacy work during the Commission will be focused on this issue.  We are extremely happy to collaborate with the Sisters of Mercy in a side event on March 17th entitled -‘No Random Act: Human Trafficking and the Interplay between Systemic Oppression and the Individual Life Course   CSW March 17th Parallel Event Addressing Human Trafficking- Sisters or Mercy, Good Sheperd Sisters and ACRATH  The research for this work comes from Good Shepherd programs in the Philippines.  Yolanda Sanchez, in Geneva was able to make a statement promoting ‘the life course perspective’ with the Special Rapporteur on the Sale of Children, Child Prostitution and Child Pornography.  Final Oral Statement for the 31st Session of the UN Human Rights Council 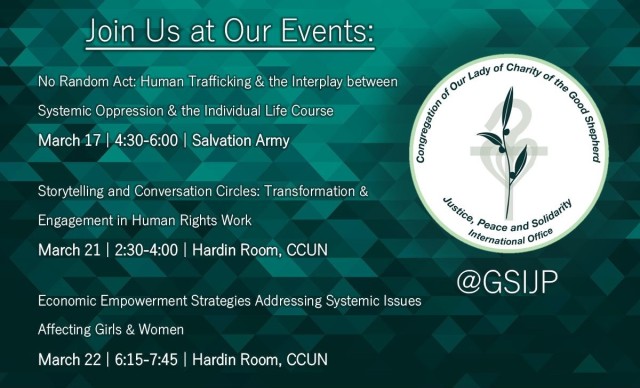 Yolanda can be seen almost at the end … she was the last of the NGO’s to be heard that day. 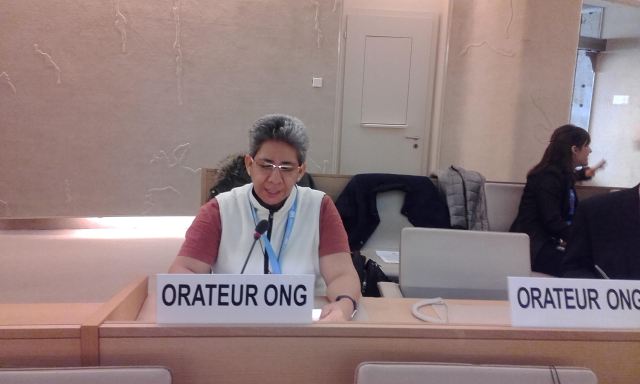