The 69th session of the General Assembly of the United Nations will commence today.  The President Elect is His Excellency Mr. Sam Kutesa, from Uganda.  The new President was elected on June 11.  Secretary General Ban Ki Moon made some remarks following the election acknowledging the experiences that the new president bring to the position, outlining the skills required of a President of the General Assembly, noting some of the momentous agenda items for this session which will have great consequences for the well being of all people and the planet. The Secretary General concluded with the desire that all member states seek to work together to end extreme poverty and set the world on a path to peace, justice and sustainability through dialogue, decision and actions, to bring about the world we want and a life of dignity for all!    Click here 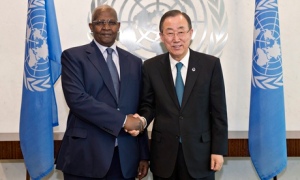